So this book forced me to realize two things about myself:

1.) I like a some mystery in my books, and I want to be left guessing for a long time.

2.) I’m not a fan of small town contemporary romance.

So as you can guess, I solved the mystery very fast and yes, this is a small town contemporary romance. But I’ll start with a synopsis.

Strawberry Valley is a small town where everyone knows everyone. Three men move to town and all the women are excited. Brook Lynn’s sister, Jessie Kay, is one of those women. She’s already slept with Beck and now she’s moved on to Jase. Brook Lynn is tired of always rescuing her sister… but her sister is the only family she has. She finds Jessy Kay in Jase’s room… and though it feels wrong, she’s attracted to Jase… and Jase is attracted to her. But Jase has secrets. He’s sure that if Brook Lynn finds out about them she’ll leave, like everybody else in his life. But their attraction only grows stronger and soon they can’t deny themselves.

She was just so bright, a total contrast with his mind, which was always so dark. He felt drawn to her, and it both ramped him up and soothed him. It was difficult not to crave her presence.

It was a sweet book… maybe too sweet. Quite early on I realized this would not be more than a 3 star for me. Mostly because we are let in on Jase’s secrets before brook Lynn figures them out. I know this is a stylistic feature where the fun is in wondering what Brook Lynn’s reaction would be. I’m not a big fan of this stylistic feature. BUT, I read on… mostly because I thought it was a sweet book. There were some positives to it and Jase was incredibly hot so why not?

But then things didn’t get better. There was a small mystery woven into the story and I had figured it out as soon as it was mentioned. Which was maybe 30% in. Which means when it was revealed at around 97% (I kid you not), I was over it.

Now I mentioned I’m not a fan of small town contemporary romance… I love mystery and darkness and erotica… and this one had very little, if any, of the three. The main story (as is the case in Contemporary Romance) is how the main couple come together and how they fall in love. It’s just not enough to hold my interest unfortunately. So I was willing to admit that this was a 3 star read for me only because I’m not a fan of sugary sweet and fluffy Contemporary Romance, and that CR fans would probably love it… but then my rating dropped due to the other reasons mentioned above.

Then we move on to the humor… I felt the book tried too hard. I mean, I could tell where the jokes were but I didn’t laugh. I mostly rolled my eyes. There were too many cliches…

I feel bad criticizing this book so much but it just wasn’t my cup of tea.What I did learn though is that I should stay away from this genre. There was some potential of it being a deeper story… but the potential wasn’t realized.

So if you’re a Contemporary Romance fan… if you love a story based only on two people falling in love and the small bumps they face along the way, if you don’tt mind a fluffy story, then this is for you. Unfortunately for me…

Amazon buy link -> The Closer You Come by Gena Showalter 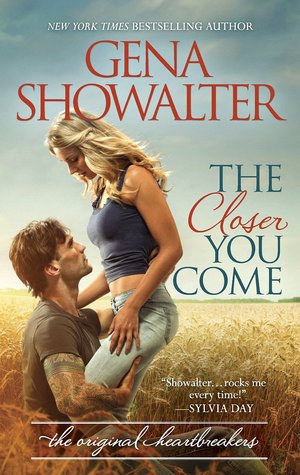