Something unexpected happened. In retrospect I guess it was bound to happen but I have to say it blindsided me. After falling in love with this series, rating every book 4.5 – 5 stars, I finally bumped into the one I didn’t fall in love with.

Pleasures of a Dark Prince is Garreth MacRieve’s story. I was so excited because I think Lykae’s are my favorite immortals in this series… they’re just that much sweeter in my opinion. So anyway, in book #2, we met Garreth. He is Lachlain’s younger brother and therefore a Prince. Garreth is out playing rugby when he scents his mate, Lucia. He immediately pursues her…

The way he looked at her was consuming, savouring – as if she were the most beautiful creature on earth and he’d ben starved for the sight of her.

…but she rejects him. He vows to find out everything about her.

Lucia is a Valkyrie and the best archer in the world. But her gift did not come from practice. No, she was gifted her gift. See, at sixteen, she met a man and fell in love with him, turns out the man is the devil. Seriously. In her escape, she was helped by the skathi goddess who gave her the gift. However, she always has to hit her target or she’ll felt pain like she’s never known. Also, the devil wakes up every 500 years or so and she has to go put him back to slumber. And so that is her mission. Only now she has a Lykae trailing her, because he has to have her and protect her. Oh and did I mention Lucia can’t have sex? That’s another of her punishments… and this Lykae is not taking no for an answer.

So like I said, this series has been the best thing I’ve come across in a very long time. I expected to fall in love yet again and I did not. And here’s why. Lucia admittedly had her share of problems, so she had to avoid Garreth. It just annoyed me how much she hurt him. In escaping him, hiding from him, it just exasperated me. I get she had her reasons but I grew tired. Then there’s the fact that the secondary characters were mortals and it was set in the amazon… I was bored. I didn’t skim, but the story was exciting in the beginning and the end, the middle was just tedious.

The saving grace? Garreth. A sexy alpha male with a big heart. He did everything for Lucia – protected her, loved her…

“You are everything to me!” He wrapped her hair around his fist, forcing her to meet his frenzied gaze. “Why can I no’ be that for you? Let me claim you for my own. Choose me this night…”

“You canna know how much I’ve wanted to hear you telling’ me you love me.” He stared at the ground looking lost. “And I want to make you happy, crave to.”

So he made the book for me…. All in all, I can’t wait for the next book so that I can reconnect with my favorite series. 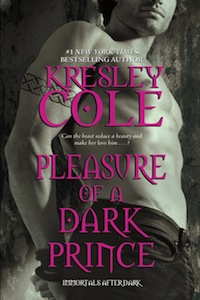