It somehow seemed right that he’d never loved before her. That she simply was the emotion for him, the two equaling each other.

Sigh, this series! Still going strong and no sign of slowing down! I still can’t believe I waited this long… if I knew, this would solely be a Paranormal Romance blog… who needs mortal men? 😉

Dark Needs at Night’s Edge is the story of Conrad Wroth. He was turned into a vampire against his will by his brother Nikolai. Hating what he was turned into, he decided to embrace the dark side of being a vampire. He drinks mortals and immortals to death, making him a red eyed vampire. His brothers trap him in an effort to bring him to the good side. They hold him at an old house, not knowing that a ghost lives there.

The ghost is Neomi Laress, a former ballerina in the 20s where she was killed by her scorned lover. Neomi is lonely, mostly because nobody seems to see her. Until Conrad does. For some reason he can see her, and their story begins.

I will say this is not my favorite instalment. Book 2, 3 and 4 were just so spectacular, though this one still holds its own. Conrad was just a different sort of hero. He wasn’t like the others in my opinion, though I can’t quite put a finger on what made him different. He just was. Neomi is also not as kick ass as the other females, being a ghost and all.

That being said, few series’ can rival this one. The world that Kresley Cole has created is just incredible and the side characters thrill as much as the main characters. I marvel at the fact that I’m not anywhere near slowing down when it comes to this series…

But back to the story. Conrad is deemed crazy because of all the blood he’s taken over the years… so he can’t just tell his brothers that he sees a ghost they can’t see. This made their relationship a sweet secret… Conrad oh poor tortured soul, trying so hard to be good for his Neomi… and Neomie looking for ways to be with Conrad like a man and woman should, it was heartwarming.

But their life together is fraught with difficulties. Conrad has to fight to keep her, even though she knows there’s no way he can… it’s fated for her to leave…

“What do I have to do, Neomi?” He ran his hand over his wearied face. “Who do I have to kill to keep you? Tell me what to do, and it’s done.

That’s Conrad, ever the warrior, ever the protector. But with a vulnerability the kind you don’t see much with the men in this series.

I enjoyed their story, not my favorite (because Bowen MacRieve has my heart), but definitely a superb addition to the series. 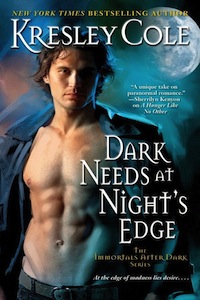