The Professional introduces us to Natalie, a PhD student searching for her birth parents. Her investigator disappears and she gives up hope. One day, in a bar with her friends, she sees a stranger. She’s always been good at reading men, so good at spotting who was what, which is mostly why she remained a virgin, never saw one she wanted enough. But with this stranger, things are different. Her friends can’t believe she’s found the one man she can’t decipher.

“That’s one hot piece of tackle- in a cage fighter/GQ model mash up kind of way. Probably gets more ass than a toilet seat. But he got you to look twice, which makes him a rare and wondrous creature, this bar’s very own unicorn. Requires closer investigation…”

And so she investigates and comes face to face with Aleksandr Sevastyan. A 3 piece suit wearing, scarred AND tattooed man. No wonder she can’t read him. But he knows her. He’s been sent to protect her. A professional… but there’s so much more to him… and their story begins.

Yes, he wants Natalie, wants to possess her… but he also has dark secrets he doesn’t intend to share. Add to that the fact that he’s been sent to protect her… A Russian enforcer in the Russian Mafia… He had everything I go for (in the fictional sense). Oozing bad boyness… and a dirty talker to boot.

“When a woman singles me out” – he leaned down to murmur at my ear – “it’s because she wants to get fucked. She looks at the scars and tattoos and knows she’ll get fucked hard.”

Yes. Sevastayn is exactly what our virgin heroine needs.

It was as if I’d thought pleasure was only rated on a scale of one to ten, and then this guy seductively whispered, “Didn’t you know? The upper end is infinity.”

But she’s not a naive virgin. In fact, she was the furthest from naive. She was funny and I have to say I identified with her A LOT. Mostly with her humor and her relationship with her best friend Jess (who deserves her own book!) But more than that, she was intelligent. She made a few questionable choices in my opinion, but all in all a heroine I liked.

“If you become mine, I won’t let you go.” His words were clipped, as if he was biting back frenzy. “Understand me, if I’m, your first lover – I will be your last.” The ringing tone of finality chilled me. “And I would kill any man who thought to touch what was mine.”

And he was serious with that. Sevastyan was used to figthing for what he wanted. And when he got it, he kept it. Which to be honest, kinda scared me.. but well.. turned me on as well… just like our heroine…

“This need I have for you… it should unsettle you.”

“Because it unsettles even me.”

I vacillated between 5 and 4 stars because there were times I thought the heroine was making crazy decisions but after all was said and done.. I loved their story… humorous and steamy, just how I like it. 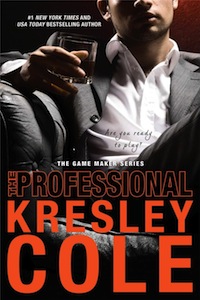 I’d like to thank Gallery Books/Simon and Schuster for providing this ARC for my review.