My favorite type of dark read is one that takes your heart through the grinder yet you can see the light at the end of the tunnel. And this was that kind of book for me. Dark and depraved but so much hope, and you’ll root and root for these two to find the light in their darkness.

Beneath the Burn is the story of Charlee and Jay. Charlee is a tattoo artist who while closing shop meets a struggling musician – Jay. Jay wants to get a tattoo done on his back to cover up his scars. A nondescript one will do but Charlee disagrees. She thinks that it would be a waste to cover up such a blatant show of survival and would much rather celebrate it. While working on the tattoo, they both feel a strong pull towards each other. Both victims of heneous crimes, yet both, in their own ways, survivors. And that is how their story begins.

But while Jay’s trauma is in the past, Charlee’s nightmare is far from over. See, she was kidnapped at 16 years old by Roy, an obsessive, sadistic man who turned her into his own personal sex slave. She managed to escape him once. But luck might not be on her side a second time.

I loved watching these two heal each other.  They both drew such strength from each other while confronting their realities. Charlee’s kidnapping and life in near solitude has left her craving for affection. While Jay’s childhood trauma has resulted to him fearing and shying away from touch from absolutely everyone.

Life was jaded like that, throwing them together when he couldn’t tolerate affection and she was desperate for it.

But they fought for each other. Went through insurmountable challenges and managed to heal each other through it all. Their story is told over a couple of years. We see Jay becoming a rock star which of course makes it almost impossible to be with Charlee, what with him being a celebrity with paparazzi and groupies and her being on the run. Because make no mistake, Roy wants her back. And he’s a billionaire, so he has all the means at his disposal.

We get action and intrigue, love and romance, tears and laughter. It was an amazing mix that truly rocked my reading world. And on top of it all, seeping though each page, heartbreak and hope. Weird right? That the two would go together? Well, Pam Godwin manages to capture both and it was so beautiful to read.

This is a different sort of dark read. It’s a romance story and therefore I expected the author to gloss over the dark bits, make it more hearts and flowers… yet she doesn’t. She doesn’t shy away from the tough parts, parts that make the reader uncomfortable. She makes you confront the realities of rape and abuse that these two face.

I absolutely loved their story. One of such courage in the heart of such depravity and danger. It’s a long story, 96 chapters long, but all building towards a brilliant finale. I thought it could have been cut down, could have been less descriptive in parts, but once I reached the final chapters, heart in mouth, tears welling up, I probably wouldn’t change a thing.

Amazon Buy Link – Beneath the Burn by Pam Godwin 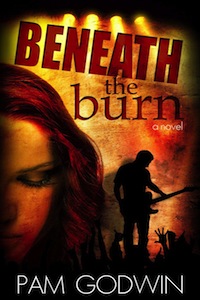 4 Responses to Book Review – Beneath the Burn – Pam Godwin