The moment I discovered the Black Dagger Brotherhood series, I couldn’t tear myself away to read anything else. I read Book#1 to #6 as if on fire. While Book #1 to #4 were brilliant, I didn’t enjoy Book #5 and #6 nearly as much, which is why it took me about a year before I finally decided to read book #7.

Book #7, Lover Avenged, is the story of Rehvenge, half vampire half sympath. Sympaths are also known as sin-eaters, they rejoice in everything painful and bad. So the law is clear on those who are sympaths, they cannot live with the rest of the population and must be deported to the colony.

Which is the reason Rehvenge hides his true identity. To do this, he must supress his sympath side by medicating himself… this way, only a few know what he is. He goes to the vampire clinic every once in a while to stock up, which is where he meets Ehlena. Most people are afraid of Rehvenge… maybe it’s because of his outward look, or because they can sense the danger within him… and the nurses at the vampire clinic are no different. Except for Ehlena. Sure she smells the danger, but she starts seeing something else… loneliness… something she knows all too well. And thus their story begins.

I’ll start by saying that  I enjoyed Rehv’s story. I”ve had a crush on him since he was introduced in the other books and he always was a mystery I was dying to figure out. Rehv…

He was a cobra, this male; he truly was… mesmerizing because he was deadly and because he was beautiful. With that mohawk and his hard, smart face and is big body, he was sex and power and unpredictability all wrapped up in… well, a black pin-stripped suit that clearly had been made for him.

Yes, Ehlena was attracted to Rehv. But there was so much to know about Rehv… things she would never have guessed. Not only is he half sympath, he’s also the owner of ZeroSum, a club known for it’s drug dealings and prostitution. And as if that isn’t enough, he’s forced to sleep with his half sister, a sympath – if he doesn’t , she’ll get him deported to the colony. But he sees the goodness inherent in Ehlena… and he wants her… if only to feel clean… good… for a while.

Sigh, I truly felt for him. He just wanted to deserve Ehlena… to not have to be lonely anymore. It was truly heartbreaking. But Ehlena was there with him, every step of the way. She even fought for him, when he felt he didn’t deserve her. A beautiful beautiful story.

And while his story was detailed enough, I do have some complaints. The book was not solely Revenge’s story… we got Wrath’s story, John Matheww and of course the darn Lessers. While the idea is that the Brotherhood protects the vampire race from the Lessers, I have to admit I find the storyline a bit of a bore. Thing is, this was Rehv’s story, he’s not in the brotherhood and while his story somewhat intertwined with that of the lessers, I just wish the author could have focused more on Rehv.

Similarly, Wrath already got his story told in Lover Mine. I thought it weird that we get more on him in Rehv’s book. I did enjoy it to a point, but again, this was Rehv’s book. And the same goes for John Matheww… sigh… maybe the series has ran it’s course where I’m concerned. I skimmed too much. I just wanted Rehv’s story and the rest was such a distraction.

That being said, it has JR Ward signature humor and wit, not to mention tht all the yummy brothers make cameos 🙂 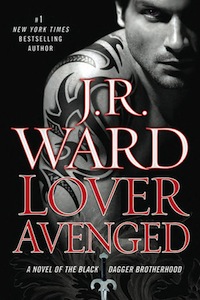