I’ve learned, in my short life, that you can’t run if you tear a ligament, but your heart can be broken into a million pieces and you can still love with your whole being.

Book #1, Real, is one of my favorite books of 2013, so I was very excited to find out we’d be getting a sequel. Who wouldn’t want more of Remy?! The incredibly intense, incredibly sexy, incredibly sensitive underground fighter who fought his way to the number #1 book boyfriend spot. No, ‘excited’ doesn’t even cover my feelings about getting a sequel!

Mine begins right where Real left off. Brooke is back with Remy and every thing is as good as it could be. Until things start going south. First, Scorpion is back. You know, Remy’s opponent in last year’s championships. He’s determined to break Remy, and he knows to truly do that, he has to get to Brooke. Additionally, Remy has just acquired yet another Achilles Heel, but he’s determined to do everything to protect it.

I will start by saying that this book was all Remy. Sigh, Remy…

He is a stud. He was made to mate. To procreate… I want every fragmented part of him. I want his body. His mind. His heart. His beautiful soul.

He was as protective, as growly sexy, as wonderful as he was in book #1. Maybe even more so. And I couldn’t help but feel for him. He fights hard, but he loves even harder. And though he wants Brooke with everything in him, he still gets those ‘black’ days when he doesn’t feel he deserves anything. My heart broke for him and I think I fell even more in love with him if that’s even possible!

“You,” he says, his voice terse and commanding as he drags his wet thumb across my lips, “are going to love me until I die. I’m going to make you love me even if it hurts and when it hurts, I’m going to make it better, Brooke… You’re going to fucking love me if it kills us.”

Sigh. We follow him through this year’s championships. His fight to finally make his dream come true. But of course his road is paved with a thousand obstacles. He has to fight even harder to get to the championship. And not just in the ring. In fact, this is possibly the hardest he’s fought outside the ring.

And if book #1 was filled with sexual tension, this one is filled with just as much steam. These two could not get enough of each other! And I loved watching them fight to be together. Fight for each other. That being said, Broke annoyed me to no end. She became even more insecure – unbearably so. With all Remy had to deal with, I wished for him a calmer person. She was just too much.

Gah! I was like those crazy fans of his, “Leave her Remy! I’m here!” 🙂 I will say that Brooke made up for it in the end. With her support for him… finally getting the strength to calm down and be there for him when he needed her the most.

All in all, I unashamedly judge the book entirely on Remy. On what he is, who he is, for his fight, for his love, just for being him. Katy Evans has created the perfect male character. Sexy, protective, sensitive, tortured… imperfectly perfect. Incredibly beautiful, flaws and all. 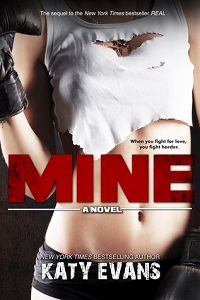 I’d like to thank Katy Evans, Gallery Books and Enn Bocci for providing this ARC for my review.

Katy Evans is giving away:

Just click on a Rafflecopter giveaway to enter! Good luck!