This is the first time I’ll review two books in one review. Reason being that the second book, Pearl, is an alternate POV of the first, Shades of Pearl. That being said, I really wanted to see how the two books compliment each other. And whether the story benefits from the alternate POV. Turns out it does, but I’ll leave that for later in the review.

Shades of Pearl is the story of Pearl Robinson, a 40 year old documentary producer. She is tasked with interviewing a brother and sister duo who are the founders of a highly successful social media site. The two founders are Alexandre Chevalier and his older sister Sophie Dumas. Pearl is convinced that Alexandre, 25 and a billionaire, is as geeky as they come. Turns out he’s not only successful and intelligent, he’s also extremely hot, and French 🙂 They meet and it’s lust at first sight. And so their affair begins.

This is one of the books with that recurring tagline, “If you loved Fifty Shades of Grey…” and since I actually did enjoy Fifty Shades of Grey, I wanted to give it a go. I however wondered if it would set itself apart. Turns out that would be the least of my concerns.

See, there were a lot of things that just could not allow me to get into the story. First, Pearl was supposedly 40 but she behaved so much younger- her mannerisms didn’t scream 40-year-old-woman to me. She also decided to come up with names for her vagina… she called it Venus which bugged me and V-8, apparently because it was like a powerful engine of a car… sigh…

Now Pearl wasn’t the only one coming up with ridiculous names. Alexandre started calling her vagina ‘pearlette’… you know, because he’s French and her name is pearl *cue eye roll*. He would say things like “Who else has been making love to my Pearl and her juicy little oyster?” or “They call it the Reversed Cowgirl. You’re in control, Pearl. You call the shots… with your pistol… with your pussy pistol.” I kid you not! I honestly don’t know who talks like that. Not just during sex, their conversations just felt weird. Stilted.

I have to say that I loved the idea of a ‘cougar’ storyline. I wanted to see why a 25 year old successful billionaire would fall so in love with a 40 year old. Unfortunately the story left me unconvinced. They fell too much too fast. It just didn’t feel natural to me. And while I’m not against insta-love storylines… I want to later understand what it was that drew the characters to each other. The explanation given just didn’t cut it for me. And I couldn’t help but roll my eyes at the fact that she’s older and her last name is Robinson… you know, à la Mrs. Robinson in The Graduate. She, Pearl, found that fact ironic and it was joked about… I just… sigh…

You must wonder why I kept on reading… And not only that, why I went on to read Alexandre’s book, Pearl… I have no one answer. But the one I can come up with right now is that I was on a road trip with my boyfriend and it made for interesting discussions.

But on wards with the story. Pearl, Alexandre’s POV allowed us to know Alexandre. The story was still strangely written and the situations and conversations unnatural. I did however get the sense that more is to come with this story. There seems to be some building up to some suspense. Not just with their relationship, but also on the grand scheme of things. See, Alexandre’s company might not be as clean as they seem. And with Pearl being so serious with producing documentaries with a cause, it just might cause a rift.

I’ll end by saying that I hate writing reviews of books I did not enjoy. I always tell myself to quit reading if I don’t enjoy it. But I received these books as part of a blog tour and felt obliged to give them an honest try. And once I’ve finished a book, I want to review it, good or bad. I will also say that my experience with a book might not be yours. Maybe the words pearlette and pussy pistol turn you on… to each his own.

On Amazon: Shades of Pearl and Pearl by Arianne Richmonde 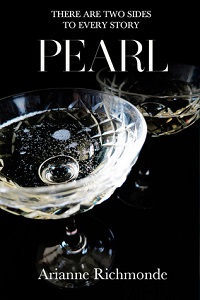 Finally I’d like to thank the author for providing this copies for my review.