Rants and Raves – Of Plagiarism…

I once got an interview with one of my favorite authors and I was super stoked about it. I wanted to ask her a naughty question and I kept wondering how to phrase it and not make it sound too… what’s the word… lewd maybe? Well I didn’t want to offend her so I spent some time wording it. About two months later, the same author had been interviewed in another blog so I decided to check it out. To my surprise the last four questions (including the one I spent like 15 minutes wording) were exactly the same!

So I, being the goodie-two-shoes who never let even her best friend copy her exam, felt quite angry about it. So I emailed the blogger (not sure what I was hoping to accomplish) and let her know that those questions were exactly like mine. She responds and says, “great minds think alike.”

So here I am thinking, unless we’re Siamese twins connected by brain, no way we worded, especially that question, exactly alike. Anyway, it’s not like she stole my discovery for the cure for cancer, so I just let it be.

Just the other day, the whole plagiarism scandal broke out. It was doing the rounds on blogs and Facebook but if you haven’t seen it, allow me.

On June 26, Dear Author posts “The Plagiarizing of Tammara Webber’s Easy by @JordinBWilliams“. Turns out Jordin Williams, published a book called  Amazingly Broken which apparently did so well, it was No. 58 in the US Kindle store. However large parts of her book were stolen from Easy by Tamara Weber, and yet another part, from Beautiful Disaster by Jamie McGuire! Dear Author has the text to prove it so check it out.

So I’m thinking, I was pissed off because a blogger stole 4 questions, can you imagine how livid I’d be if someone plagiarized my book?!

Then the plot thickens. Turns out, and you can read it all in this post, some very perceptive people discovered that a few author profiles on Goodreads seem to be linked. Under Liz Thomas’ page, you find the book ‘Finding Cassilia’ by Emily Curran. But on Amazon, Finding Cassilia is supposedly by Liz Thomas…. check out that discussion here. Wouldn’t be that suspicious to me because some authors write under different pen names. But these two, Emily and Liz, are apparently linked to a Beth Klein who, other than using another person’s photo as herself, was also promoting Amazingly Broken (the plagiarized book by Jordin Williams). All of them belong to a group called “Sexy Romance” on Goodreads and they’ve only read one book; Amazingly Broken.  Their next to-read book? Cherry Popper by KA Andrews. Turns out KA Andrews and Jordin Williams just might be the same person!

So one of my favorite bloggers says that after finding out the links between Jordin Williams and KA Andrews, she emailed KA to cancel a scheduled blog tour participation, and sometime later, KA’s account was deleted.

Reads like a mystery novel doesn’t it? And what’s a mystery without a cool visual? 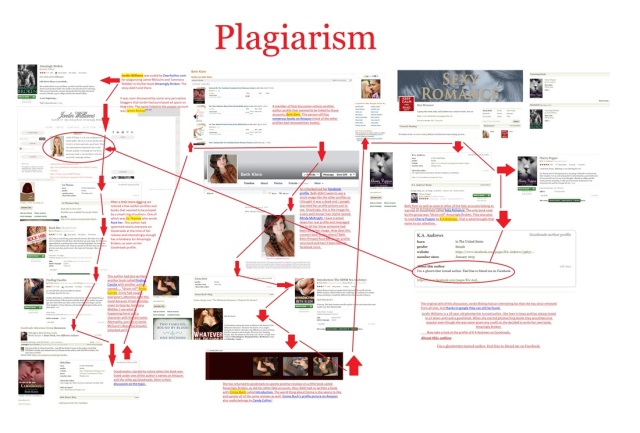 So, as I was compiling yesterday’s freebie list, I found a book that looked interesting enough but some commenters claimed it was the exact same book with name changes as another book by a different author. This is the 2nd or 3rd time I’ve seen a discussion on amazon along the same lines. And let’s not forget other past plagiarism claims…

The fact that so many of these fake authors exist scares me. And especially now in the era of e-books, seriously, it’s plenty scary!

But I’ll end with an awesome graphic by author CD Reiss;

This entry was posted in Contemporary Romance, New Adult and tagged books, Rants and Raves. Bookmark the permalink.

11 Responses to Rants and Raves – Of Plagiarism…