I haven’t read book #1 in this series so I wasn’t sure whether this could be read as a standalone. I was aware that each book follows a different character therefore I decided to wing it, not without a warning from a fellow reviewer that I would be missing some backstory. I will say I was initially confused, possibly the warning and the awareness that I was going at it ass backwards made me feel that way. The author has definitely provided a lot of backstory for those like me, so my conclusion is that it can still be read as a standalone.

The blurb; Shelly Laurent escapes her life as a high-class escort, but against her better judgment she takes the scared young Ella with her. Framed for murder by her pimp and his dirty cops in retaliation, Shelly turns to the one man who could be her salvation: Detective Luke Cameron. She doesn’t know if she can trust him or if he’s just a mirage, but it’s time for her to take a stand. Just one shot, make it count, she’ll fight Ella’s demons—and face her own.

Shelly throws light on the shadows of Chicago’s underworld, challenging everything she knew and the man she’s come to love. Together, a prostitute and a cop fight for truth stronger than secrets, hope deeper than deception, and a bond more enduring than betrayal.

I was unprepared for this one. I got to see the world of prostitution like I haven’t before. The battle of a young woman whose eyes have seen too much, whose body has felt too much. Yet her only salvation, if she’s to have any, is by committing crimes she never imagined committing.

Shelly is the kind of heroine I’m drawn to. Flawed yet strong.  She was sexually abused in the past and found herself in the world of prostitution. So when she came across Ella, barely 18 and clearly new to world, she knew she had to help her get out. Mostly because she believed that it was too late to save herself so at the very least she could save someone else. Years of selling her body had of course left her with deep emotional scars. She couldn’t imagine a man wanting her for anything other than her body.

Enter Luke Cameron. He was everything Shelly wanted, the light in the darkness that was her life. But she couldn’t bring herself to even hope for a future with him. After all, their professions were worlds apart…

“Well, we can make our last stand here. The star-crossed lovers have to die together, you know. That’s how the story goes.”

“Is that what we are?” he murmured.

“The hooker and the cop,” I said. We’re from opposing families. Fated to tragedy.”

Yup, their story is not the warm cozy kind. Its full of raw emotion, a dark romance, the love of two people so dissimilar in the eyes of everyone else yet so similar in every way that matters.

“I would recognize you no matter how you looked. I would find you anywhere. I haven’t learned every secret of your body, but I know what’s inside. I know you.”

I loved their journey… full of angst, full of action… a compelling read.

Amazon: Selling Out by Amber Lin 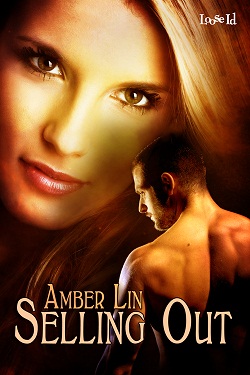 Amber will be awarding a $25.00 prize to a randomly drawn commenter during the tour so feel free to comment below for your chance!

Finally I’d like to thank the author and Goddess Fish Promotions for providing this copy for my review.