I am so excited to be on Tiffany A. Snow’s Turning Point Blog Tour! The Kathleen Turner Series is my FAVORITE series to date! Click these links to read my reviews; No Turning Back (Book 1), Turn to Me (Book 2) and recently released Turning Point (Book 3).

The author, Tiffany A. Snow, is giving one lucky commenter here a chance to win a digital copy of one of her Kathleen Turner books! As if that’s not enough, there’s a Tour Grand Prize of a KINDLE Paperwhite or HD! Giveaway details are at the bottom of the post.

Thank you to Jessy’s Book Club for hosting me on the blog tour for TURNING POINT, the third book in The Kathleen Turner Series.  There will be a total of five books in the series.  Book four, OUT OF TURN, will be released on 12/17/13.

Sometimes I will write a “deleted” scene out of one of the books in the series, usually from a third-person perspective (since the books are written in first person, we only get Kathleen’s point of view).  This is a “deleted” scene from the first book in the series – NO TURNING BACK.  In it, we see Blane Kirk’s point of view the first time he and Kathleen spend some…quality time together.

Blane Kirk hit the key fob to lock his Jaguar as he headed into the law firm.  He’d had to deal with the mess at the courthouse from his idiot client who’d decided to attack his runner.  That had taken most of the day.  Needing to blow off steam, since beating the shit out of your clients was bad for business, he’d stopped by the gym afterwards to work out.  Gladly discarding his suit and tie, he was now in much more comfortable jeans and black Henley shirt.

The wind had picked up, turning the October evening chilly, but Blane didn’t feel it as he crossed the lot, his mind elsewhere.  He hoped Clarice had gotten that brief typed up before she’d left for the night, though he’d given her little notice.  She was divorced with a couple of kids, though Blane couldn’t say how old or if boy or girl.  She’d told him at some point, but he couldn’t remember.  What he did remember was that Clarice had trouble staying later than six or so because of them.

The elevator deposited him on the fifth floor and it was quiet when he stepped out, the only sound that of the grandfather clock ticking in the corner and the quiet clacking of a keyboard as someone typed.

Blane glanced at his watch, surprised.  It was nearly seven.  Damn.  Now he felt bad.  Clarice had probably had to jump through hoops to get someone to watch her kids so she could work late.  Secretary’s Day was going to be expensive this year.

But it wasn’t Clarice typing at her desk.

Blane stopped a few feet away, staring at the woman concentrating so hard on typing that she hadn’t even heard him come in.  He knew her without even seeing her face.

It was that girl.  Kathleen.

The girl with the palest of reddish-blonde hair and eyes a startlingly clear blue.  Blane would never forget the way she’d looked up at him…right after she’d crashed head first into his lap in the middle of the conference room, surrounded by clients.  Things had then gone from bad to worse when she’d shoved her hand in a place unused to such rough treatment.

At least, not without his consent.

It was strange though, her being here, especially after what had happened today.  Crazy ass clients.  Sometimes he wondered if he’d chosen the right profession.  Blane was damn lucky, as was the firm, that the idiot hadn’t done more damage.  The liability damages on that lawsuit would’ve been painful to see.

Blane stepped closer, but Kathleen still didn’t look up.  Finally, he said, “What are you doing?”

She shrieked, a piercing sound that made Blane flinch.  Jumping up, she overturned her chair in a cacophony of noise as she spun around to face him.

“Jesus,” he said, shoving a hand through his hair in irritation.  “What was that for?”

“You scared me,” she snapped, her blue eyes flashing.  “You shouldn’t sneak up on people.”

Was that a reprimand?  “I didn’t sneak,” he corrected her.  “And you didn’t answer me.  What are you doing?”

Her tone oozed you’re-a-dipshit and Blane’s eyes narrowed.  She had spunk, he had to hand it to her.  It had been a while since anyone had dared to take that tone with him. Even as he thought it, she seemed to realize she might have overstepped.  Her pale cheeks flushed pink and her eyes dropped from his.

Her gaze seemed to give him a slow once over, taking in his shirt, his jeans, all the way down to his shoes.  Then she licked her lips and swallowed.

Well.  That certainly got his attention.  Blane wondered if she did it unconsciously or if she was trying to send a signal.  Was she interested?

“Clarice had plans so I offered to help finish this for her,” she said, finally lifting her eyes back to his.

Ah.  That explained it.  But it was a Friday…  “Don’t you have plans for tonight, too?”  She was young, pretty.  He imagined she had a boyfriend waiting for her.  No ring, so not married or engaged.

Kathleen turned pinker and shook her head, looking away as though embarrassed. Blane debated saying anything more to her, but she looked nervous now, her earlier bravado gone.  She righted her chair and threw him a quick glance before resuming typing.

Her movements were quick and jerky.  Blane frowned as he saw the screen beyond her.  Gibberish, it looked like.  He hoped she could type.  Maybe he was making her uncomfortable.  Probably best to just leave her alone.

But he hesitated just a beat longer, watching her.  She was very pretty, very…innocent.  It was practically stamped on her forehead.  With an inward sigh, Blane turned his thoughts away from the direction they’d been heading and went into his office.

Maybe ten, fifteen minutes later, there was a tentative tap on his open door.  Blane glanced up.

“Clarice said to leave these for you,” Kathleen said, handing him the file.

“Thank you,” he said.  The temptation to say something, prolong their interaction, was great.  But she was his employee.  His very young, very pretty, and no doubt very naïve employee.  Blane turned back to his computer.

After a moment, she seemed to realize she’d been dismissed, and turned and left.  A draft of air and Blane caught the slight floral scent of her perfume.  It was fresh and light, reminding him of spring near the ocean.  It suited her.

Two minutes later and Blane knew he wouldn’t be able to concentrate any more tonight.  He had to run that file by anyway.  Definitely couldn’t ask Kathleen to go there.  Besides, it was dark.  Shouldn’t he head outside and make sure she’d left safely?

That thought had him hurrying to pack his things in his briefcase and lock up the office.  Moments later, he was scanning the deserted parking lot as he walked to his car.

There.  Blane frowned.  Odd she was still here.  He switched directions and headed for her car.  When he got closer, he saw what the problem was.  A telltale clicking sound when she turned the key.  Dead battery.

Approaching the driver’s side window, he saw her bang her forehead lightly against the steering wheel.  The sight made his lips twitch.

Blane tapped lightly on the glass and she jerked upright.  She seemed less than pleased to see him as she opened the door.  “Yeah?”

She nodded.  “Guess so.”  Her tone was comically miserable.  Blane hid a smile.

“Need a lift?”  No, she needed someone to jump her car. Even as Blane thought of the jumper cables in his trunk, he still heard the offer come out his mouth.

To his surprise, she shook her head.  “No, thanks.  I’ll just call a tow truck or something.”

This was a first.  Blane didn’t usually have women turn down an opportunity to spend time with him.  For some reason, her refusal made him persist in this idiocy.  “It’s late and it’s cold.  Let me take you home.”

Kathleen was shivering and Blane wished he’d worn a coat just so he could offer it to her.  Tiny as she was, she had to be freezing.

She still seemed to hesitate and Blane decided to take matters in his own hands.  She’d freeze to death deciding whether or not he could give her a ride home.

“Come on,” he said, pulling her door open the rest of the way.  His hand had grasped her arm before he realized he’d wanted an excuse to touch her.  “I have to run an errand first, but I should be able to get you home before a tow truck would show up here.”

It wasn’t until she finally acquiesced, grabbing her things from the passenger seat, that Blane realized he’d been holding his breath.  She walked beside him to his car, her stature diminutive, but Blane’s every sense was focused on her.  He didn’t release her arm and he wondered slightly at the feeling of satisfaction it gave him to be able to help Kathleen tonight.

He handed her into his car, and judging from her sharp intake of breath, his car had made a good impression.  As Blane rounded to his side, he realized that this probably wasn’t the best idea he’d ever had, but surely he’d spend a few minutes talking to her, assuage his curiosity, and that would be that.

You seriously have to read the books to see where it all goes from there! 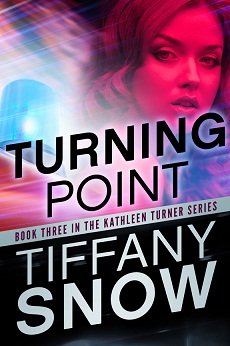 After her promotion from law firm Runner to Investigator, Kathleen Turner is learning the ropes of her new job from none other than assassin-for-hire Kade Dennon, a situation her boyfriend Blane Kirk is none too happy about. But the lessons with Kathleen take a back seat when Kade becomes a target. Previously untouchable, his enemies now know of the chink in his armor – his brother’s girlfriend.

And Kade’s not the only thing coming between Kathleen and Blane. From Blane’s inexplicable defense of a man guilty of a horrible crime, to a mysterious stranger from Kathleen’s past, to Kathleen’ risky investigation into human traffickers, the obstacles mount against a relationship that’s just begun to find trust again.

While Blane considers a job offer that would take him back to the front lines in the war on terror, Kathleen is determined to pursue her new career, with or without his approval. Unfortunately, her current case is far more dangerous than anyone knows. Someone close to Blane will go to extreme lengths to split them up, lengths that may prove worse than death for Kathleen.

Kathleen, Blane and Kade must atone for the sins of the past and the present. The fallout will force Kathleen to aturning point…in her career, and her life.

If you missed any of the tour stops, you can always go back and check what they were upto; Here’s the schedule;

To win a digital copy of one of the books, all you have to do is comment below. Tell me if you’ve read the series, if you have are you Team Blane or Team Kade? 🙂 If you haven’t, no worries, here’s your chance! In your comment, tell me which of the three books you’d love to win.

For the Grand Prize KINDLE paperwhite or HD, click on this link -> a Rafflecopter giveaway